"When she's not working in Speed the Plough, Sauter gives the Feelies' racing concision a generous dose of folky ventilation in Wild Carnation, a trio with current STP bandmates Richard Barnes (guitar) and Christopher O'Donovan (drums) . Singing her wistful, nostalgic reminiscences in a low pleasing voice that sometimes wanders away. Sauter opens Tricycle by proving she can do the bussing fever pitch pop-rock thing in "The Rising Tide." Most of the album, however, eases up on the tension and the density (while retaining the brisk tempos), allowing acoustic guitar strums and spare drumming to set the emotional tone, mirrored in rustic songs like "Shaker Tune" and "The Music Box." Elsewhere, Barnes' distortion leads and pretty jangle figures add bite. Sauter addresses her lyrical interests - the relocation of Brooklyn's baseball team, trains, airplanes, the enviorment and people - in straightforward terms, investing more solemnity in the words than the music."
-IRA A. ROBBINS, Trouser Press Guide to Nineties Rock

"After only a few bars, 'The Rising Tide,' Tricycle's opening track, crashes down with the nervous excitement of its bubbly guitar line, and you're likely to feel a clammy sweat building on your neck as anticipation whirlpools around inside your chest. This New Jersey trio, fronted by former Feelies/Speed The Plough bassist Brenda Sauter, tucks powerful hooks such as these into all of the songs on it's debut album, and then pretties them up with folk inspired, Byrds-y arrangements, not unlike nascent R.E.M. Tricycle's dozen songs are both crisp and billowy, delicately played with attention to musicianly detail, but relaxes enough to suggest a spring breeze, much like New Zealand's Bats. After it's telling opening, the album follows in a similar vein with the effervecent tracks 'Acid Rain And The Big One' and 'Dodger Blue,' Sauter's plaintive voice occasionally taking the spotlight, but mostly meshing beautifully with the music. On a slightly differant tack, 'Scarf Dance' is cushioned by cozy organ beds and Sauter's sing-songy vocal line. Also try the slow, loping 'The Music Box' and the light, misty 'Shaker Tune' which closes the album on a spiritual note."
-LYDIA ANDERSON, CMJ Jackpot!, 14 August 1995 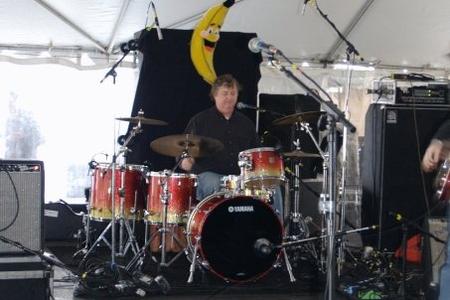 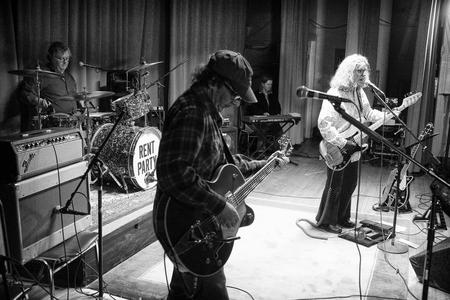 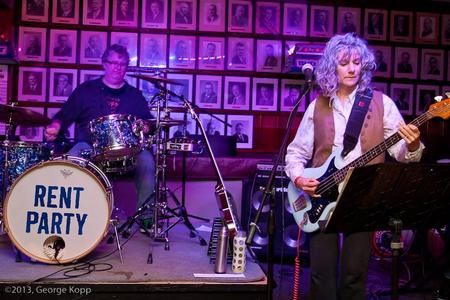 "The lineage of this northern New Jersey trio offers a polite starting point for understanding its sunny songs: Bassist/vocalist Brenda Sauter played with both the kings of frentic jangle, The Feelies, and the more folksy-leaning Speed The Plough. But Sauter's new band, in which she does all the singing and lyric-writing, could've just as easily sprung from the greener land of New Zealand, considering Wild Carnation's affinity for pop highs like those created by The Bats or The Clean. The group's sprightly electric/acoustic guitar interplay and driving melodies, along with Sauter's plaintive but firm vocals, threaten to lift right off the ground in pursuit of the next billowy cloud. Warthbound dreamers are recommended to check out Wild Carnation's new album Tricycle (delmore), a crisp, fully-realized debut."
-L.A., CMJ Music Monthl 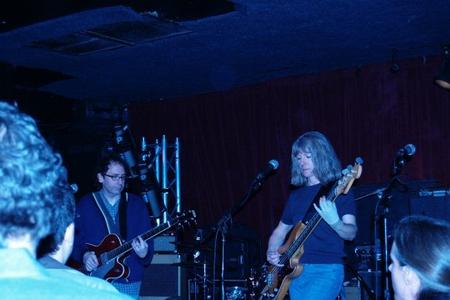 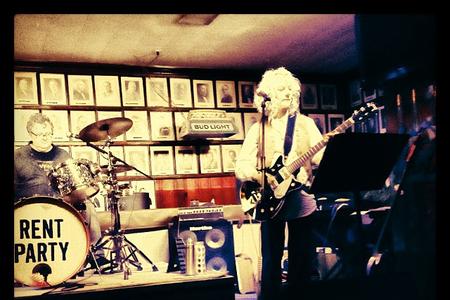 Although they broke up after their fourth album "Time for a Witness" (1991), the Feelies     still loom large as an influence on inventive rock bands, with echoes of their swelling melodies and trademark "crazy rhythms" in the Strokes and the Arcade Fire, to name only two. Fans of the New Jersey quintet have been hoping for a reunion for years, and while there's no sign that will ever happen, they can content themselves with the rare but always fulfilling release from veteran Glenn Mercer (who's issuing a solo album later this year) and Brenda Sauter, the vocalist, bassist and leader of Wild Carnation. Sauter's group made its impressive debut as a guitar, bass and drums trio with a single and an album ("Tricycle") released by the then Chicago-based Delmore Records in 1995. Twelve years may seem like a ridiculously long wait between releases, but then the Feelies were never a band to be rushed, either, preferring to craft their mysterious sounds in their suburban basement laboratory, and waiting to issue them until they had a suitably
impressive set. Now expanded to a quartet with the addition of a wonderfully droning Farfisa organ, Wild Carnation does the Feelies' legacy proud on 10 lovely and hypnotic songs produced by fellow indie-rock legend James Mastro of the Bongos, with Sauter's limited but charming vocals (think Maureen Tucker of the Velvet Underground) and the group's variation of that familiar undertow rhythm grabbing and holding the spotlight.

Some artists don't excactly rush out records too often and Wild Carnation is in the same exclusive league as Mark Hollis, Scott Walker and The Blue Nile. Superbus is Wild Carnations second album, 12 - that's TWELVE - years since their debut for Delmore Records in 1994. I thought they had disbanded a long time ago and just recently became aware of their continuing existence through a link from seminal New Zealand band The Bats' MySpace page.

The Feelies and their extended family of bands have always meant music with it's own
voice in America and quite a distinct one as well. Wild Carnation doesn't shock us with
extraordinary news this time but just as, say, sadly missed Go-Betweens and the before mentioned Bats, it's a band we can expect quality from every time. They purvey a blend of the old (VU fronted by Nico) and not so old (New Zealand music in the 80's) and it is always the good melody that is their main goal.

As an avid fan of all things Feelies, I try to check out all related bands and artists. Wild Carnations' bass player Brenda Sauter played on their three latest records back in the 80's/early 90's which is enough for me to give them a fair chance. She also played in The Trypes with other Feelies and Speed The Plough with other Carnations Rich Barnes and   Chris O'Donovan. Now a four-piece with Anne Hopkins on Farfisa organ, Wild
Carnation is just as good as we can hope for - if not better.

The opening song "The Road To Bielefeld" is quite simply the best new song I have heard   this (and probably the rest of the) year. A nervous, jangly guitar opens, then the hi-hat     and bass and a distant female voice. Verse two and the Farfisa organ in all its cheesy glory. The chorus is a true revelation that gives me goosebumps on each listen; a heavenly blending of female voices. The bass playing is spectacular on this song (and on the album as a whole), innovative and startling. I bought a copy of the album for my brother's birthday and a text message from him on first hearing revealed a common opinion. You can actually check out this song on their MySpace website. If that doesn't    make you want to hear more you don't need to read no further.

The following songs is not in the same league (how could they?) but it never gets less
than interesting. At the end of the record, on the last three songs to be precise, things
are getting better again; Uptempo Cricket with some nice 12-string guitar fills, the
beautiful and eerie (to my ears, at least) "The Eventide" (more Rickenbackers!) and the
more laidback Into the Sun closes the album.

Some of their songs run for too long but that is part of the fun in a way with this kind of music. Anyway, a great record and already a contender for record of the year (yeah, I  know it was released in 2006...).

So, any chance of a new trip to Bielefeld (via Oslo) sometime?

While the hookline for this new local trio would have to be that bassist/leader Brenda Sauter used to be a member of the later-'80s incarnation of the famous Feelies (and its notable offshoot, the Trypes), even if you didn't worship at the alter of that group (and especially if you did!), Wild Carnation is a revelation. While the persistent, pumping beat and hard-played jangle guitars of most of the tracks here emanate from her previous band and from their forerunners, the Velvets (especially),Television, and the Byrds - Sauter's beguiling voice is perfect for the ultra-appealing pop hooks the group writes as well as the thoughtful lyrics she composes. Trading the occasional Feelies drone for sugar-sweet
melodies (yes!) and utilizing the pretty ring of the guitars to maximum effect, songs such as Wings are the perfect pop confectionery, too honeyed and delightful to miss capturing your bending heart and too consistently insistent and edgy to be wimpy, kind of like Reckoning-era R.E.M. It's all so well captured with pristine production, with balls to match the heart, too! And though the 12 tracks are largely cut from a similar   mode, all seem special just the same on their own. A truly shining, first-rate effort, along with Lotion's and Nyack's early EPs and the last Flower LP, the best release to come out of a New York group this decade, and exceptionally crafted at that! Do not miss. ~
All Music Guide 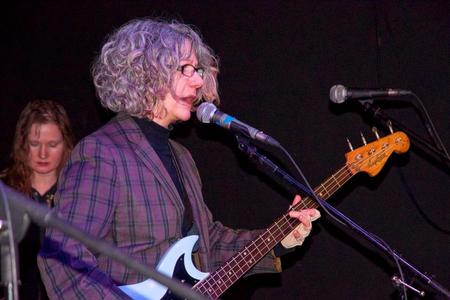 Raygun Magazine - 1994 - 3rd anniversary issue
Tricycle - Delmore Recordings
The first time I heard Tricycle I was driving through a hellacious storm. As bolts of lightning
crashed around me and my car suffered at the hands of a barrage of hailstones, streets began to flood and drivers along the highway pulled over waving white flags of auto-surrender. Not me. I had Tricycle spinning on the CD player, a bouyant chuck of mannered pop so positively glowing it lit my way like a stong beam lantern and parted the highway seas. Puddle after puddle, Wild Carnation kept my driving sure. it could have been ex-Feelie Brenda Sauter's mellow intonations and engaging lyrics that had me steady at the wheel. Perhaps it was Richard Barnes' gorgeous electric and acoustic guitar work and equally compelling melodies. Or maybe Christopher O'Donovan's tasteful percussion. Whatever, Tricycle is a nearly brilliant slice of pacific vibes, highly recommended for lovers of breezy pop as well as drivers of foul weather everywhere.  - Bob Gulla

Have we waited for this! Circa 1993 I played this Hoboken, NJ trio’s debut 7” “Dodger Blue”  b/w “The Lights Are On But No One’s Home” 50 times, captured by its strange undercurrents           and regretful longing like the best New Zealand pop (it’s also the only song to effectively use baseball as a metaphor for loss). Their 1994 album Tricycle followed, also excellent. The hook was the lineage of bassist/leader Brenda Sauter, a post 1983 Feelies member also active with Speed the Plough and The Trypes, but I maintained that Wild Carnation was the best of ‘em. Sauter, guitarist husband Rich Barnes, and drummer Chris O’Donovan never disbanded, becoming a quartet in 1999 with keyboardist Anne Hopkins, but no second LP appeared. Finally a damnable 12 years later, here it is… and it’s even better!!!! Unlike Tricycle, you won’t need a while to discern the full depth of their interplay and explorations on simple chords (something they inherited from The Feelies, via Velvet Underground), as this recording is popping at the seams
(kudos producer James Mastro, guitarist of the recently reunited Bongos). And Sauter’s double-tracked voice has never sounded fuller-sweeter (like Mo Tucker if she could really sing) finding those honey melodies that fly out of this like bees from a hive. From “The Road to Bielefeld” (also on their MySpace page) to “Cricket” to “Catch a Curb”, there’s one engaging guitar-pop nugget after another. This is the best local record I’ve heard in ages and thoughts of seeing this live fill my head. 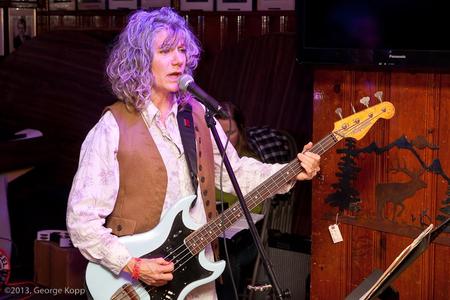 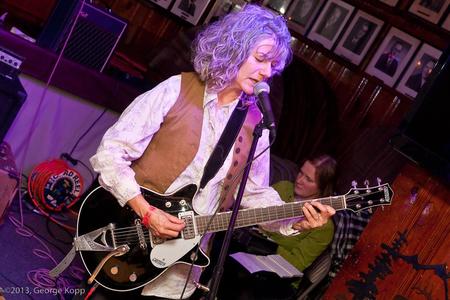